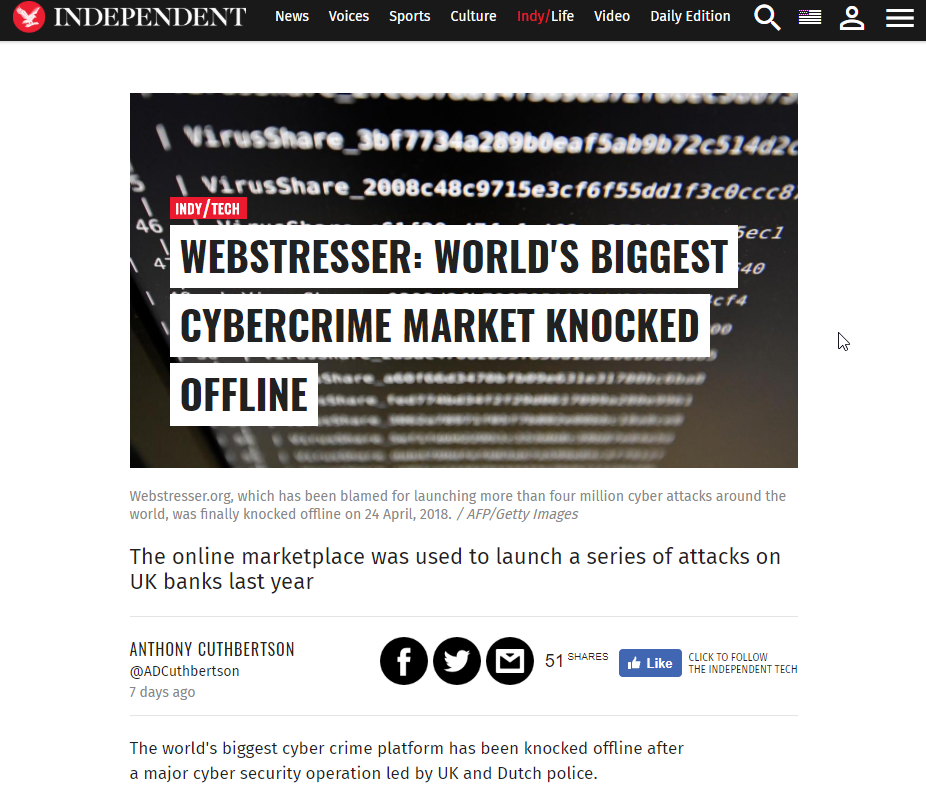 The world’s biggest cyber crime platform has been knocked offline after a major cyber security operation led by UK and Dutch police.

The website Webstresser.org, which was responsible for over four million cyber attacks around the world, was brought down after police tracked down administrators in the UK, Croatia, Canada and Serbia.

Attacks carried out using Webstresser included a series of attacks on UK high street banks last year that caused hundreds of thousands of pounds worth of damage.

“The illegal service was shut down and its infrastructure seized in the Netherlands, the US and Germany,” Europol announced in a press release.

Webstresser.org sold software capable of causing major disruption through what are known as distributed denial of service (DDoS) attacks. Such attacks overwhelms websites and online services by overloading internet servers with traffic.

“DDoS attacks have always been a relatively straightforward way to harass or extort an adversary – and with sites like these offering to carry them out for such a low cost, it’s not just cybercriminals that are crippling others’ businesses,” Trevor Reschke, head of threat intelligence at security company Trusted Knight, said in an emailed comment to The Independent.

Mr Reschke warned that even with Webstresser offline, cyber criminals will continue to exploit security vulnerabilities through rival services.

“I’ve no doubt that where Webstresser has left a hole, the existing competitors will quickly fill the space,” Mr Reschke said.

Webstresser offered its DDoS services from around 15 euros per month, allowing people to perform crippling attacks without the need for specialist knowledge.

“We have a trend where the sophistication of certain professional hackers to provide resources is allowing individuals – and not just experienced ones – to conduct DDoS attacks and other kind of malicious activities online”, said Steven Wilson, Head of Europol’s European Cybercrime Centre.

“It’s a growing problem, and one we take very seriously. Criminals are very good at collaborating, victimising millions of users in a moment form anywhere in the world. We need to collaborate as good as them with our international partners to turn the table on these criminals and shut down their malicious cyber attacks.”